Since 2016 I have been working on a trilogy ‘Siberian Exiles’ about the deportations from the Baltic states to Siberia under the Soviet regime. In the three parts, eyewitnesses tell of the deportation of women and children to remote parts of Siberia, life in the Gulag camps, the organised resistance against the Soviet occupier, and the beginning of the Cold War.

As a documentary photographer it is my aim to contribute to keeping all these memories, which give us a glimpse into a hidden history, alive. I want to give a voice to the forgotten or ignored victims. Due to the high cost for photo book production I have started this crowdfunding campaign. With your support I would like to publish the results of my work in:

In part 2 of the trilogy I follow the story of Lithuanian, Latvian and Estonian men and women who joined the resistance to fight for the freedom of their country.

In 1944, the Red Army advanced westward and drove the Germans out of the Baltic states. The atrocities committed by the Soviets during the first occupation were still fresh in people’s minds. They knew what the Soviets were capable of because of the mass deportations, arrests, and executions between 1940 and 1941. In the event of a reoccupation, a new wave of violence and repression was expected. Because of this, there was a strong willingness among the Baltic people to resist and fight for independence.

World War II was underway, and the Russians mobilised Baltic men to fight for the Red Army. However, those men would rather fight against the Russians than with them. Many headed to the woods instead, and an armed partisan war against the Soviets ensued, which lasted from 1944 to 1956. The total number of partisans, including women, is estimated at over 50,000, comprising 30,000 Lithuanians, 10,000 Latvians and 10,000 to 15,000 Estonians. Each partisan had several local helpers, making the total number of people active in the resistance many times highe. 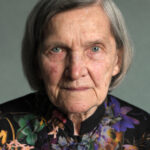 “I provided the partisans with medicines and bandages from the hospital and sometimes treated them in secret.” Lidija Lasmane 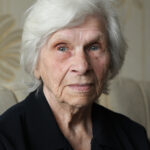 “I became a liaison for the partisans and was given the code name lily of the valley.” Genutė Griškevičiūtė 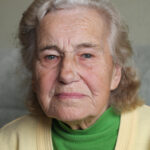 “During the interrogations the Soviets wanted me to give them the names of the partisans. I refused.” Prima Bučytė

The partisan movement could only work with the population’s help. People living close to the woods helped the partisans get food, medicine, bandages, and clothing. Others became informers, passing on important information or distributing the underground partisan newspaper. The partisans and informants were given code names to prevent them from betraying each other in the event of arrest. Besides the armed partisans, there were also many citizens, who wrote and distributed patriotic pamphlets. They encouraged the population not to surrender to the occupier. 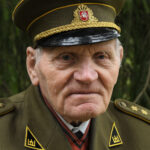 “Our son Antanas was born in our first bunker on 22 December 1950.” Jonas Kadžionis 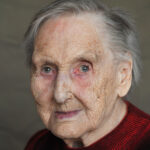 “The Soviets surrounded us and herded us to the marsh. Everyone was shot dead, except for me.” 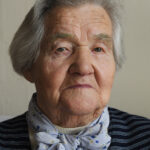 “During one cross-examination, the interrogator showed me a photograph of four dead bodies. He covered the faces with his fingers and revealed them one by one.” Ona Butrimaitė

When the resistance started, the people believed the occupation would be short-lived and assumed the West would intervene and not leave the Baltic inhabitants to the Russians. However, the West took no action, and the Soviet Union’s annexation of the Baltic States remained until 1991.

Between 2021 and 2022 I traveled several times through the Baltic states, to visit the archives to learn more about the freedom fighters and their lives in the woods. I  visited 15 very elderly partisans and informants and recorded their life stories. In the interviews they were telling about their acts of resistance, their arrest and about life in the prison camps. The resistance fighters I interviewed were willing to risk their lives for freedom and independence at a very young age which made a deep impression on me. In the light of the war in Ukraine, their stories became even more meaningful to me. During the conversations many pointed out to me that history is currently repeating itself and therefore it was even more important to them that their story be shared. In addition to the portraits I made I wandered with my camera through the vast Baltic forests that have long been a refuge for many.

The book contains the portraits and compelling life stories of the 15 partisans, archive photos from the parisans, from KGB files, prison camps in Siberia  and from the forests during different seasons.

Graphic designer Sybren Kuiper, with whom I previously worked on my publications ‘Wolfskinder A Post-War Story’ and ‘Siberian Exiles Part 1 and Part 3’, has compiled my images, texts and archive material into this new publication.

From 4 February – 21 May 2023 the result of the complete project will be shown in the Nederlands Fotomuseum in Rotterdam after which the exhibition will travel to other locations.

How will your money be used?

With your contribution, the production costs of the book will be covered. They include, inter alia, image editing, layout, translation and printing. My financing goal is 35.000,- euros to produce a limited edition of 750 copies in self-publishing. Should backing of the project not permit a quality production of any kind, you will receive a hassle-free, full refund.

What will you get in return?

If you want a different composition of rewards than you can choose on the list, please contact me: claudiaheinermann@gmail.com

You can click the amount of your choice on the bar and pay by either IDEAL, PayPal or direct transfer to my account.

If you have any questions about the book or project you can always contact me.

The project Siberian Exiles was made possible with support from:

If you want a different composition of rewards than you can choose on the list, please contact me.