‘SIBERIAN EXILES – Part 1 Lithuania’   is divided in 5 separate books (each book is 24cm x 17cm)  and  will be delivered in a slipcase including a little index brochure.

If you also want to receive the separate Lithuanian translation please send me an e-mail claudiaheinermann@gmail.com

‘SIBERIAN EXILES – Part 1 Lithuania’ is the first part of a trilogy about the deportations from the Baltic States to Siberia under the Soviet regime and focuses on the experiences of six Lithuanian survivors who were deported as children to the Laptev Sea above the polar circle. In 1941, their families were sent to the Altai region and in 1942, they were moved, along with three thousand other Lithuanians, to the delta of the Lena River to build up a fishing industry.

This publication contains drawings, archive photos and interviews with the eyewitnesses. Claudia Heinermann travelled to the Altai and Yakutia in search of traces of this remarkable chapter in history and recorded what she encountered there: the landscape of these remote areas, the villages, the culture, and the indigenous people with their still vivid memories of the time under Stalin.

This book is a journey through history and has become a story about oppression, abuse of power and crimes against humanity. It is also a story about a people who refused to be broken and to give up their identity and culture. It is about human resilience and the will to survive. 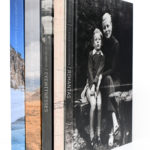